Texas Forensics traces its origins back to 1883, when the faculty chartered a literary society for the express purpose of fostering debating and oratorical activities. The society, one of the oldest organizations on the University of Texas campus, was named The Athenaeum Literary Society, and was created with the express goal of training and developing its members in forensics. Founded originally as an all-male society, the Athenaeum was joined in 1888 by the Ashbel Literary Society, for women. Other women’s societies also followed, including the Sidney Lanier (1900), Reagan (1902), and Pieran (1911) societies. Two men’s societies also emerged, called the Hogg Debating Club (1905) and the Rusk Literary Society (1883), which was primarily geared toward public speaking. In 1941, a women’s speech organization was founded, called Forensica.

The first national organization joined by the University of Texas was the Delta Sigma Rho honorary society founded in 1906 at the University of Iowa. Joining DSR in 1909 along with Harvard, Yale, Iowa State, and Missouri, Texas was one of the oldest chapters of that organization and the first from the state of Texas. The Texas chapter submitted annual reports to DSR describing the various forensic activities until the 1960’s, all of which were published in DSR’s national publication, The Gavel. UT sent student representatives to the first, second, and third Delta Sigma Rho National Student Congresses from 1938-1941.

Speech and debate activities were organized by many of these varied organizations until being brought together under an umbrella called the Texas Forensic Council, advised by Thomas A. Rousse. This later became the Texas Forensic Union. Until the early 1980’s, speech and debate activities operated out of the same administrative leadership. But as the contests for speech and debate began to diverge, the program was split into two separate organizations in 1988, under then Dept. of Speech Communication chair Kathleen Hall Jamieson. The two separate teams operated under the guidance of graduate students until the creation of faculty positions in 1993, formally instituting the Texas Speech and Texas Debate teams.

UT began hosting high school invitational tournaments and summer workshops in forensics in the 1950’s. UT’s National Institute in Forensics (UTNIF) is now one the country’s largest and most comprehensive summer programs for high school students, bringing almost 450 students to the University of Texas each summer.

Texas has been involved with the National Debate Tournament (NDT) since the first contest under that name, in 1947. In 1988, the University of Texas began its history of involvement with the American Forensic Association’s National Speech Tournament (formerly the NIET). UT has been a regular participant in the NDT and the NST every year since that time. 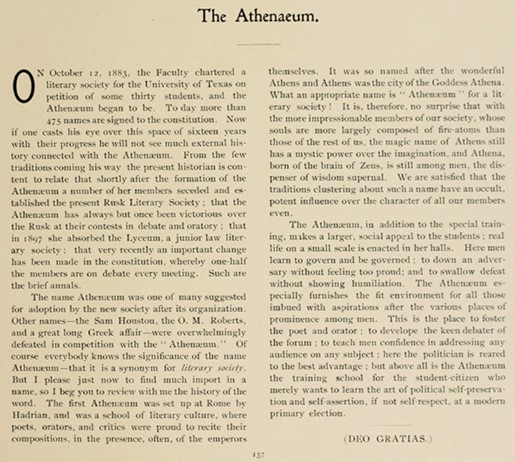