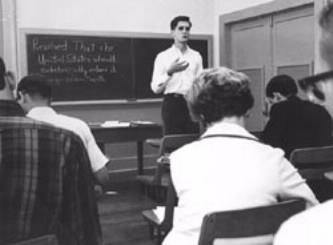 It is open to any undergraduate enrolled at the University. If you are interested in joining the UT debate team, please contact Brendon Bankey: brendon.bankey@austin.utexas.edu.

We compete at both regional and national debate tournaments, allowing students from a variety of backgrounds and skill levels to compete.

Our program has advanced teams to the elimination rounds of the NDT every single year since 1990, a claim which no other program can make. The debate team alone has been ranked in the top 10 since 1990, and together with the Individual Events team, we have won 13 consecutive AFA NDT/NIET Joint Awards.

We offer scholarships and out-of-state tuition waivers to our most qualified and nationally-competitive debaters, as well as graduate student stipends for assistant coaches through the Department of Communication Studies. The program is funded through several sources, including the College of Communication, Student Service Fees, endowments, and self-funding through the UT National Institute in Forensics and the Longhorn Classic high school tournament.

Every UT team entered at the 2005 national tournaments advanced to elimination rounds! Alex More and Sara Apel reached the semifinal round at the NDT, with Brian Peterson and Sarah Heaton and Spencer Johnson and Mariesa Herrmann both reaching the double-octafinals. At CEDA Nationals, Claire McKinney and Varant Yegparian reached double-octafinals, and Jenny Davis and Chris Thiele reached triple-octafinals.

If you have benefited from the program or support our activities, our students can use your help.

Austin, TX – The University of Texas debate team has been invited to participate in the prestigious Lafayette Debates, public debates April 11-13 in Washington, D.C., hosted by the French Embassy in partnership with the Institute for European, Russian and Eurasian Studies of the George Washington University.

Natural Science senior Risha Bhattacharjee (Coppell, TX) and CMS sophomore Haley Tuchman (Chicago, IL), were selected to represent the University because of their outstanding performance in the Lafayette On-line Debates. “Several UT students participated in the debate and reached the elimination rounds, but Risha and Haley had the best overall performance,” said Joel Rollins, director of debating and senior lecturer in UT’s communication studies department.

“The Lafayette debates are a unique experience that allows undergraduate students to intellectually engage with renowned international relations scholars, political figures from around the world, and policy-makers and business professionals in the global community. There are few opportunities quite like it,” Rollins said.

Teams that advance to the final four of the debates will be invited to France to continue their exploration of the tournament topic firsthand in discussions with French government officials, diplomats, scholars and business people. This prize includes round-trip airfare, lodging and expenses while in France. These debates are intended to promote dialogue and relations between the United States and France by engaging future leaders on timely topics of mutual interest.

The topic selected for the 2013-14 Lafayette Debates addresses an issue of critical importance to both the United States and France, specifically, that nation states “should maintain, adopt and implement policies and measures that they deem appropriate for the protection and promotion of the diversity of cultural expressions on their territory.”

In exploration of this topic, students will research and debate the goals and objectives of the seminal international agreement on cultural preservation, the UNESCO Convention on the Protection and Promotion of the Diversity of Cultural Expressions.

“We are honored that UT students have the opportunity to promote UT’s on-going mission of global engagement,” Rollins said.

The University of Texas has a long history of debating at the national level, qualifying for the National Debate Tournament for the past 30 years. A “rivalry” debate between UT and Southern California has been set for the second round of the competition.

© The University of Texas at Austin 2021