A Chat with Fred Jenga

Tell us something about yourself. What’s your story?

I was born in Uganda, a green, tinny, plenty of sunshine African country right on the equator. I grew up on the banks of the River Nile and Lake Victoria in the Ugandan district of Jinja. That is where my story begins. I speak Lusoga (my ethnic language), Luganda, Rutooro, Swahili, and Kinyarwanda.

Where did you get your undergrad and what was your major?

As you may probably know, I am an ordained and practicing Roman Catholic priest. Part of the requirement by Canon Law/Church Law is to be trained in Philosophy and Theology. So I have an undergraduate degree in philosophy (Pontifical Urban University Rome), and an undergraduate degree in theology (Catholic University of Eastern Africa Nairobi). As I pursued the two undergrad degrees I took several courses in journalism and communication studies. After ordination while working in media-related work I pursued two master’s degrees – one in Journalism and Communication from Uganda’s oldest and prestigious university (Makerere University), and later in Communication Studies from San Francisco State University (California).

Tell me about the work you’ve done in Uganda and the impact you’ve seen.

I have not only worked in Uganda! I have worked in Kenya, Tanzania, and Rwanda. In Nairobi Kenya I worked with youth from the Kibera slums – Africa’s second largest slums. I worked in Butare Rwanda and got to see first hand the effects of the 1994 Rwanda genocide on the people I lived with. I spent time working in a rural community in the Serengeti region of Tanzania -- the Serengeti game park you see on National Geographic with the thousands of wild animals), from Tanzania I worked in my home town of Jinja Uganda.

In Jinja I was the associate pastor, the youth minister, the director of our four private Catholic grade schools. Since Uganda was one of the countries in the world that were badly affected by HIV/AIDS, I founded an HIV/AIDS Community Based Organization that offers anti-retroviral treatment and psycho-social/spiritual support to those infected and affected by HIV/AIDS. My approach has always been to be attentive to the needs around me and then invite communities to reflect on the best way we can respond to what is going on.

Just three years back, in the poor, rural village where my parents came from to settle in Jinja for work, the challenge of access to a good education was a huge one. Kids were dropping out of school at an early age to go work in the family gardens and in sugarcane plantations; girls were getting married and having children at the age of 15! Born in dehumanizing economic poverty, young people were dropping out of school to join the same cycle of their parents. I spoke with the village elders about the power of a good education and they listened to me. We developed a concept of starting a good grade school and got the school started out of scratch! The Atanansi grade school now has 250 kids, who show up early morning in their little uniforms, largely barefooted. The philosophy that drives the school is that strong reading, writing, arithmetic, and good relational skills are important in setting kids up for success at other levels of education and in life. The school does not get any government financial support, so it depends on the community and friends who believe in what we are trying to do.

Just to return to Church-related work -- from Jinja I was asked to become the director East Africa (Uganda, Kenya, Tanzania) of a Catholic organization that extensively uses mass media in its operations. The primarily focus of the organization is on improving family life. We had several regional offices around East Africa with full time teams. I wrote several opinion editorials for every major newspaper in Uganda, I was on radio and television, and with my teams conducted so many workshops and retreats for different groups. Seeing the impact of our work, it is at that time I thought of getting some academic training in media and communication. With the approval of my bosses, I enrolled at Makerere University Kampala and later moved to the US for further studies.

Why did you decide to attend UT?

I applied to a couple of doctoral programs here in the US that expressed interest in me. The warm email exchange with Barry Brummett for me was the deal breaker. The emails told me I was communicating to a person and not a robot! I value people, relationships, and family. The reputation of the University of Texas and the quality of scholarship happening in our Communication Studies program had something to do with it, and to a Ugandan who grew up on the equator the fairly warm Texas weather was a significant consideration. There are other schools that actually offered better financial support than what I got at UT, but I came, I saw, and fell in love with UT and our department. A great decision I made.

What is the focus of your research?

I am broadly interested in the areas of politics and religion especially in Africa. Politics because I consider myself a community organizer of sorts, and an activist who is interested in how societies are governed, Political discourses are important to me and I have written several opinion editorials in Uganda’s national newspapers on topics that range from taxation, environmental issues, to equitable political participation. I care about poor people and marginalized groups. My interest in religion comes from being a church minister who has been in communication related work for a couple of years. My primary research focus is at the intersection of media and religion. I have already done some preliminary scholarly work on religious broadcasting that has already been published in a journal here in the US.  Likely my dissertation is going to be in the area of media and religion in Uganda.

What else are you currently working on?

Extreme religion has always fascinated me. How do such rhetors construct such rhetoric? Is there a way we can help the public against such rhetoric? Currently I am working on “religious rhetoric that kills.” The study does discourse analysis of a Ugandan cult that led to the death of 1500 people in 2000. I am also polishing up a paper on the representation of Pope Francis in the US mainstream media such as the New York Times, the Wall Street Journal, and USA Today.

What is your philosophy of teaching/learning?

I really look at teaching as beyond passing on information. Teaching to me is an opportunity to do formation work. My teaching is underpinned by the understanding that we live in a world that is beautiful but broken in many ways. Alongside all the good things going on in the world, we still have wars, huge disease burden in different parts of the world, lack of access to a good education, the lack of access to clean drinkable water, etc. Part of the responsibility of a teacher is to help students heighten their awareness of this tension, and encourage them to better our common home. We can’t afford to live in a bubble, we are connected to other people.

What are your professional goals?

As a priest, I am a man under the vow of obedience. My superiors can decide where I go and what I do.  It is sort of like in the army. With the caliber of academic training I am receiving at UT, there are lots of options available for me at this point, but since my life is not just about me, I have to engage in conversation with other parties to decide where I go.  Quite frankly I am not looking for a job – there are more ten jobs waiting for me when done with school. Hopefully I get a fit that puts me in direct contact with ordinary people. That is what really juices me up. If it is working in the academy I hope it has a community engagement component…or else I will create it some way! 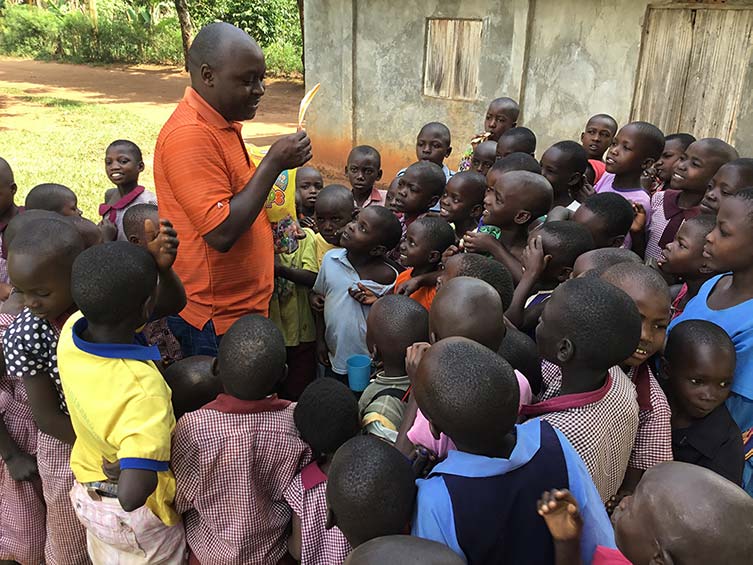 Doctoral Student in Rhetoric and Language

© The University of Texas at Austin 2020