Musicians Off the Record: Ray Benson

Musicians Off the Record: Ray Benson 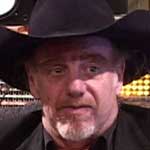 Whether traveling over the American landscape or around the globe, Ray Benson, the post-modern King of Western Swing, is one of Texas' greatest cultural ambassadors. His capacity for spreading the gospel of Texas swing seems inexhaustible, and Benson is embraced everywhere for a body of work which ties the past with the present.

Benson's leads the legendary band, Asleep at the Wheel, whose very existence is arguably the reason that Western swing remains a vital and recognizable genre to fans of modern country music. Bob Wills and His Texas Playboys were a veritable institution in the Southwest during the 1930s, and as the story goes, on the night he was to make the acquaintance of Benson, he passed away. Whether Wills' ghost reappeared in the form of Benson is debatable, but none doubt the impact the 6 foot-7 inch native Pennsylvanian has made on Wills' legacy.

Asleep at the Wheel formed in the Keystone state in 1970 and stumbled upon the Texas Playboys soon after, spurred on by a Merle Haggard tribute album to Wills and encouraged by friends like country-rocker Commander Cody. After switching their sound to Western swing, the band spent a brief period in Berkeley, California, released a major label album "Comin' Right at Ya," then did the inevitable and relocated to Austin in 1974, where they have come to personify one of Texas' most beloved music forms.

Now a near mythological figure himself, Benson describes Western swing as having "an appeal, a content that you don't get elsewhere; and the appeal is, well, all I can do is say how I feel and what people say to me, and that is, they say ‘you're kind of music makes me want to tap my feet and smile.' I think that's the element of swing."

Through 20 albums, shelves (literally) of Grammy awards, and numerous personnel changes, Benson has remained the gregarious frontman of the Wheel and been recognized as a skillful producer whose credits include recordings by Nick Lowe and Suzy Bogguss. The refreshing honesty and humor of Benson is also evident on his first solo effort, 2003's "Beyond Time."

Benson's beliefs in social and political justice are widely known. He helped found the Rhythm & Blues Foundation to assist the pioneers of American music, and sits on a number of boards including the SIMS Foundation and several other charities. "We always helped each other out," Benson said of musician's code of honor. "I wouldn't be anywhere without the people that helped me out . . . I've always tried to do the same because it was done for me and it's the right thing to do."

benson from Madeline Maxwell on Vimeo.

"I wouldn’t be anywhere without the people that helped me out…I’ve always tried to do the same because it was done for me, and it’s the right thing to do."