Musicians Off the Record: Michelle Solberg

Musicians Off the Record: Michelle Solberg 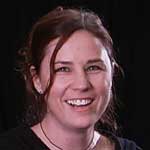 Michele Solberg is a musician with a heart as big as Texas, and possesses a talent for songwriting to match. Her work, a fusion of rock, folk and jazz, is marked by a striking voice which has won loyal fans and favorable criticism. While still a teen and coed on the campus of the University of Texas in the early 1990s, Solberg was instantly recognized for a songwriting and performance style beyond her years. She not only garnered wide praise but took home best new singer honors at the Austin Music Awards. After trials and travels across America and Europe and a series of inspired releases, she now spends much of her time bringing music to souls who are most in need of its soothing tones.

Solberg grew up in Albuquerque, New Mexico and began singing at an early age. By high school she had formed her "first band . . . when I was 16. I sang and played the guitar, the classic guitar." Soon after arriving in Austin, she found a champion in the Cactus Café's artistic director/manager, Griff Luneburg. "I started playing music my first summer in Austin," Solberg recalls. Critics gushed over a voice which—as the Austin Chronicle noted— served as a "wondrous, dextrous instrument capable of mystic swirls, airy trills, emotive swoops and dark-hued chants." Within a year she was headlining around Texas and enjoying critical acclaim for her debut full length recording, "Michele Solberg." Her follow-up titles, "Liquid," and "Floating" were also hailed. Then unexpectedly, Solberg withdrew from the limelight and isolated herself on a farmhouse on a tiny island off the coast of Denmark. Three years later, she returned to Texas and delivered the sumptuous, atmospheric strains of "Beyond the Blue" on Chocolate Records.

"Music—it elevates our mood, it causes emotion, it changes something in us," states Solberg. Solberg, ever introspective, has turned to social activism, founding Heart Gigs. "Heart Gigs is a non-profit organization that I started where we take singer songwriters, mainly, and . . . go into Safe Place, Project Transitions and Christopher House Austin, and play shows." Solberg formed the outfit to see "what would happen if, if we set up a situation where they (artists) could be involved in social work and they would, could understand how their music affected people in those situations."

solberg from Madeline Maxwell on Vimeo.

"Music—it elevates our mood, it causes emotion, it changes something in us."